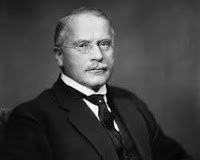 Jung, Carl (1875-1961) – Son of a pastor; his paternal grandfather and great grandfather were physicians. Took a degree in medicine at University of Basle, then specialised in psychiatry. In early papers he pioneered the use of word-association, and influenced research into the toxin hypothesis regarding schizophrenia. Jung’s addition to modern therapeutic attitudes to dream work arose out of his difference of view with Freud regarding human life. Jung felt life is a meaningful experience, with spiritual roots. His interest in alchemy, myths and legends, added to the wealth of ideas he brought to his concept of the collective unconscious. The subject of symbols fascinated him and he devoted more work to this than any other psychologist. He saw dream symbols not as an attempt to veil or hide inner content, but an attempt to elucidate and express it. It is a way of transformation where what was formless, non verbal and unconscious moves towards form and becoming known. In this way dreams “show us the unvarnished natural truth.” By giving attention to our dreams we are throwing light upon who and what we really are – not simply who we are as a personality, but who we are as a phenomena of cosmic interactions.